Pitfalls and the way forward

The relationship between Afghanistan and Pakistan has always been difficult. This has been true since the time of the founding of Pakistan, when Afghanistan at first had voted against admitting Pakistan as a member of the United Nations. The contested Durand line, drawn up by the British colonial power, has remained an ongoing point of conflict, since Pakistan considers it its international border, while Afghanistan does not recognize it. In the last decades, the relationship between both countries has remained complicated and was often characterized by political confrontation. While Pakistan's assistance in the struggle against the Soviet occupation was often appreciated, what has been perceived as "meddling in Afghan affairs" by many Afghans has created difficulties and resentment. A strong anti-Pakistani sentiment has developed in Afghanistan as a result. On the other hand, Pakistan has traditionally accused Afghanistan to cooperate with India against Pakistan, and of allowing anti-Pakistani militants operate from Afghan territory. Despite having much in common, the bilateral relationship of both countries, therefore, has often been marred by disputes. At the same time, the Durand Line, besides being a symbol of both colonial arrogance and Pakistan-Afghan enmity, also implied commonality. It was so contested exactly because the Pashtuns living on both sides of the border feel a shared history, a shared culture, and family and tribal relationships, which to many made the border feel artificial. Commonality and enmity at this point flowed from the same source. 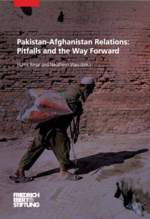 Pitfalls and the way forward
Islamabad, 2021