After the Taliban’s takeover in Afghanistan in mid-August 2021, more than 122,000 Afghan nationals were transported to several Western countries till the end of the month (Crane 2021). Some Afghans flee the country through “land routes” into the neighbouring countries (Sanderson, 2021); the exact number is not known. After the US troop withdrawal deadline of 31st August, many eyes are on Afghans, watching for their likely migration to neighbouring countries. The UN has urged these neighbouring countries to keep their borders open in the wake of a potential Afghan refugees’ crisis (Kenny 2021). Nevertheless, Iran and Pakistan, already sheltering more than three million Afghan refugees each, evinced no interest in hosting more Afghan refugees. Instead, they have tightened security on their borders. Meanwhile, the pressure on Pakistan as the old ally of the US in the war on terror is mounting. Pakistan is even expected to help return normalcy to Afghanistan in the new scenario. Jens Stoltenberg, the Secretary-General of North Atlantic Treaty Organisation (NATO), in a press conference on 20th August 2021, said: 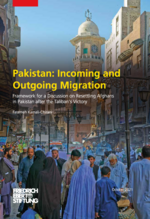 Framework for a discussion on resettling Afghans in Pakistan after the Taliban's victory
Islamabad, 2021